Carl Shulman is polling people about their predictions for the results of the upcoming ACE study to encourage less biased interpretations. Here are mine.

Assuming control group follows the data in e.g. the Iowa Women's Health Study they should eat 166g meat/day with sd 66g.1 (For the rest of this post, I'm going to assume everything is normally distributed, even though I realize that's not completely true.)

Here's my estimate of their estimate (I can't do this analytically, so this is based on simulations): 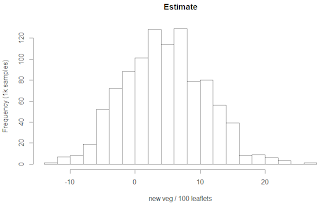 You can see that the expected outcome is the true difference of about 4 veg equivalents per 100 leaflets, but with such a small sample size there is a 25% chance that we'll find leafleted people were less likely to go veg. 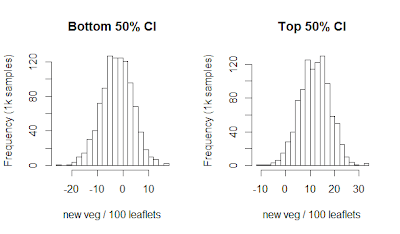 The left graph is the bottom of the CI, the right one is the top.

Putting Money where my Mouth Is

The point of this is so that I don't retro-justify my beliefs, which is that meta-research in animal-related fields is the most effective thing. I have a lot of model uncertainty, but I would broadly endorse the conclusions of the above. The following represent ~2.5% probability events (each), which I will take as evidence I'm wrong.
I don't think my above model is completely correct, and I'm sure ACE will have a different parameterization, so I don't know that these are really the 5% tails, but I would consider either of them to be a surprising enough event that my current beliefs are probably wrong.

I am open to friendly charity bets (if result is worse than X I give money to your charity, else you give to mine), if anyone else is interested.