A Graphical Introduction to Lattices

Here is my (extended) family tree: 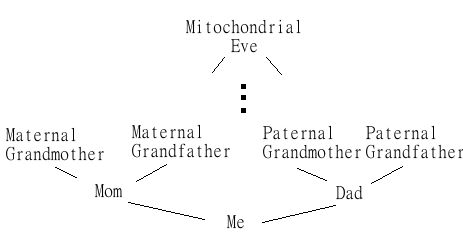 Everyone in the tree shares at least one common ancestor and at least one common descendant. This makes my family tree a lattice, an important mathematical structure. While lattices are often presented in abstract algebraic form, they have a simple graphical representation called a Hasse diagram, which is similar to a family tree.

Because most lattice theory assumes a strong background in algebra, I think the results are not as well known as they should be. I hope to give a sampling of some lattices here, and a hint of their power.

A lattice is a structure with two requirements:
Note that the bound of some elements can be themselves; e.g. the most recent common ancestor of me and my mother is my mother.

Here's an example of four different ways to fill your shopping cart: 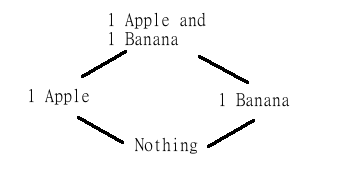 Now, some people might prefer apples to bananas, and some might prefer bananas to apples, so we can't draw any lines between the "one apple" and the "one banana" situations. Nonetheless, we can still say that you prefer having both to just one, so this order is pretty universal.

A huge swath of economic and ethical problems deal with preferences which can be put into lattices like this, which makes lattice theory a powerful tool for solving these problems.

This is a more classical "math" lattice:

Here a line between two integers indicates that the lower one is a factor of the higher one. The least upper bound in this lattice is the least common multiple (lcm) and the greatest lower bound is the greatest common divisor (gcd, some people call this the "greatest common factor").

The greatest common divisor of 4 and 10 is 2, and the least common multiple of 2 and 3 is 6.
Again we don't have a total ordering - 2 isn't a factor of 3 or vice versa - but we can still say something about the order.

An important set of questions about lattices deal with operations which don't change the lattice structure. For example, $k\cdot\gcd(x,y)=\gcd(kx,ky)$, so multiplying by an integer "preserves" this lattice.

Multiplying the lattice by three still preserves the divisibility relation.
A lot of facts about gcd/lcm in integer lattices are true in all lattices; e.g. the fact that $x\cdot y=\gcd(x,y)\cdot \text{lcm}(x,y)$.

Here is the simplest example of a lattice you'll probably ever see:

I switch now from examples of lattices to a powerful theorem:


[Holder]: Every operation which preserves a lattice and doesn't use "incomparable" objects is equivalent to addition.1

The proof of this is fairly complicated, but there's a famous example which shows that multiplication is equivalent to addition: logarithms.

The relevant fact about logarithms is that $\log(x\cdot y)=\log(x)+\log(y)$, meaning that the problem of multiplying $x$ and $y$ can be reduced to the problem of adding their logarithms. Older readers will remember that this trick was used by slide rules before there were electronic calculators.

Everything is a Set

Consider our division lattice from before (I've cut off a few numbers for simplicity):

Now replace each number with the set of all its factors:

We now have another lattice, where the relationship between each node is set inclusion. E.g. {2,1} is included in {4,2,1}, so there's a line between the two. You can see that we've made an equivalent lattice.

This holds true more generally: any lattice is equivalent to another lattice where the relationship is set inclusion.2

If you're interested in learning more: Most of what I know about lattices comes from Glass' Partially Ordered Groups, which is great if you're already familiar with group theory, but not so great otherwise. Rota's The Many Lives of Lattice Theory gives a more technical overview of lattices (as well as an overview of why everyone who doesn't like lattices is an idiot) and J.B. Nation has some good notes on lattice theory, both of which require slightly less background. Literature about specific uses of lattices, such as in computer science or logic, also exists.